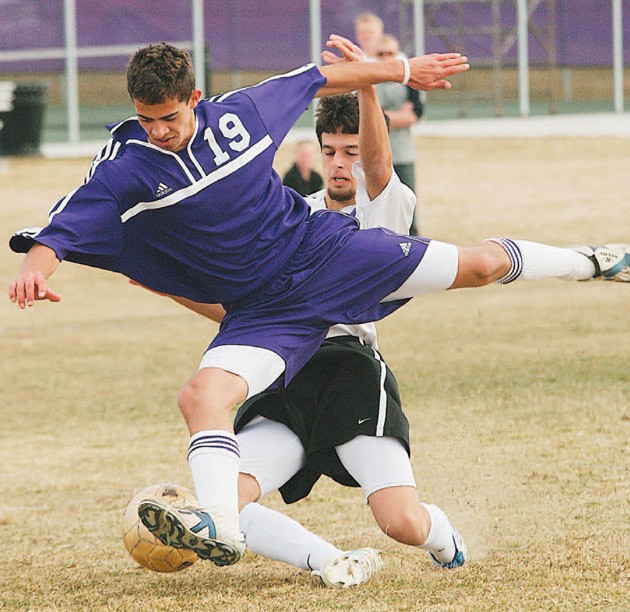 Tooele’s Chris Park (right) collides with a Lehi player in a game earlier this spring. The two teams tied in the affair and the Buffs open the Region 11 season Friday with a road trip at Bear River. photography/Troy Boman.

With only five seniors on the roster and only four returning starters back, Tooele High Coach Chris Wilcox knew his boys soccer squad might struggle a little bit out of the gates.

And to make matters worse, the Buffs faced their toughest preseason slate ever. Those two things don’t usually allow a recipe for early success.

Logan parlayed a goal in each half into a hard fought 2-0 triumph over Tooele Tuesday at THS.

Jared Pace and Carlos Zelasquez each produced a goal and Brad Heugly recorded the shutout for the Grizzlies.

The setback is just another close hard fought affair that the Buffs couldn’t quite capture. Judge Memorial battled to a 2-1 triumph over Tooele in the season debut March 4 at THS.

Ian Mohr produced the lone goal of the affair for the Buffs. Tooele fought to a scoreless 0- 0 tie with Lehi March 7 at Tooele as well.

Cedar City garnered a hard fought 2-1 victory over the Buffs Friday on the road.

Dorian Cochran logged the goal of the contest for Tooele. Pine View also handed the Buffs a 3-0 setback Saturday in St. George.

The tough preseason slate has led up to a 0-4-1 overall record on the season to date for Tooele. The Buffs venture to Tremonton Friday to open the Region 11 schedule against Bear River at 3:30 p.m. Regardless of the record, Buff Coach Chris Wilcox said he still believes in his young squad and feels the tough preseason schedule should benefit his inexperienced team on down the road.

“We feel pretty positive about things because the score of the game doesn’t always show the effort,” Wilcox said. “We knew every one of these preseason matches would be tough. This is the toughest preseason schedule we’ve ever had. Plus having a young team with only five seniors, four of which start, and we only have four returning starters back from last year’s team. The mixture of everyone from freshman to juniors will help us in the future, but right now we’re making young mistakes and they end up costing us victories or the other team is capitalizing on them.

“We still expect to battle our region foes tough this spring and make a run at the region title and a state playoff,” the coach added. “It will all start Friday when we travel to Bear River.

We’ll just have to see what happens. Our region is very tough and balanced and there probably won’t be any one dominant team.”

The starting line up and reserves have four seniors, four juniors and four sophomores along with a pair of freshman seeing a bulk of the varsity action.

Josh Cedar is in goal for the Buffs while Andrew Stagg is the starting sweeper and center defender is Cody Buzianis. The outside fullback positions have been filled with sophomore tandem Porter Hunt and Marcus Gressman.

Mohr, Pake Lyman and Derek Nielson are rotating in the two midfield slots while Jenner Black has captured one of the starting outside midfield positions. Chris Park and Chris Fowler rotate in the remaining slot.

Cochran has started at forward while Sebastian Varga and Conner England have rotated in as starters at the remaining forward position.