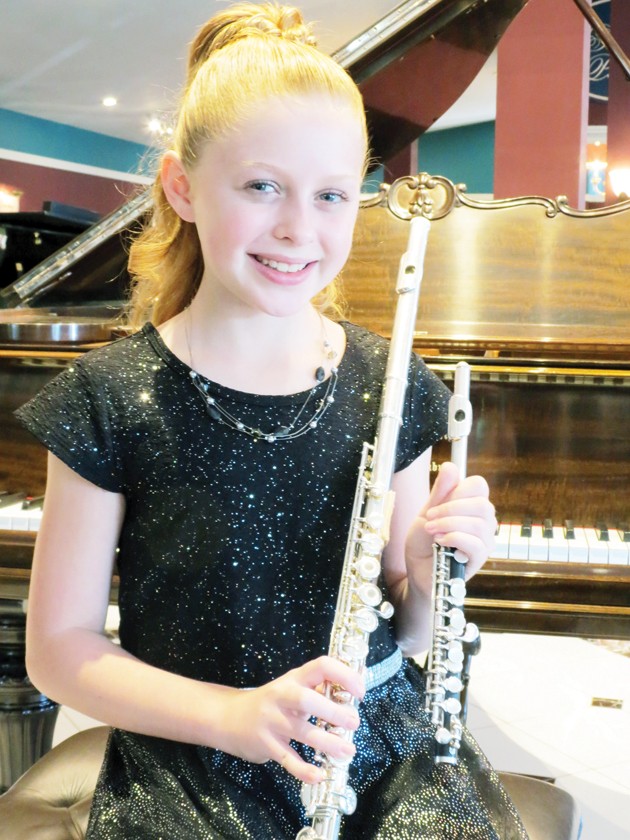 Briaunna Young, an accomplished flautist and piccolo player, was named the Tooele Valley Music Teachers Association’s student of the month for January. Young, 11, is a sixth-grader at Rose Springs Elementary.

Her 16-minute memorized program held its own against other 6th to 9th-grade woodwind players who were entered in the category. As a result of winning at the state level, Young earned the opportunity to travel to Tempe, Arizona, the first part of January to compete as a division finalist in the MTNA Junior Woodwind Competition. Young took second place, receiving the title of alternate to a ninth-grader representing the state of California. Judges were amazed at her ‘very mature playing ability at such a young age,’ her musicality and difficult programing, and her confidence in performing.

Her program included the Carnaval de Venise by Genin, Juex’s Tendre movement by Ibert, Stamitz’s Rondo movement of Concerto in G Major, Op. 29, and Sereneade a Pierrette by Szulc/Hennebains on piccolo. Young represented the state of Utah very tastefully.

Young, the daughter of Nathan and Katrina Young, is 11 years old and is a student at Rose Springs Elementary in Mr. Rob’s class. She has been studying flute from her mother, Katrina Young, for seven years.

“Briaunna is the most advanced student I have taught at her age because of her diligent and very focused practicing,” Katrina Young said. “She enjoys telling a story through her music and she makes it come alive. She is a joy to listen to.”

Young is a member of the Utah Junior Youth Symphony Orchestra in Salt Lake City and plays in the elementary band at Clarke N. Johnson Junior High School. She has won the Utah Flute Association Sonata Competition for three consecutive years in the elementary division and has been featured on their “Winner Night Programs.” She has received five Superior Ratings in Federation for flute and two on piccolo.

Young has performed in a Suzuki Institute honors recital in Las Vegas and often performs trios with her mother and older sister Aniah. She has had masterclasses with Alison Olsen, Laurel Ann Maurer, Cindy Henderson and Nancy Toone. Young is also a beautiful dancer and performed in Ballet West’s December Nutcracker as a blue soldier. She dances competitively at The Dance Center and studies pointe, ballet, jazz, and tumbling. Young is also the secretary of this year’s Rose Springs Elementary Student Council.