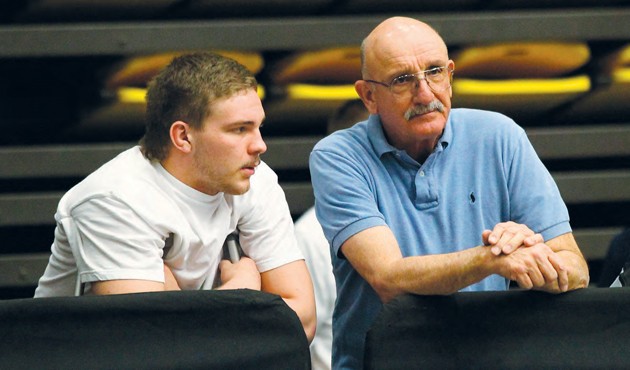 Tooele High School’s Zach Coffman talks with assistant coach Paul Dart at the 3A State Tournament at Utah Valley University Friday. Defending state champion Coffman was unable to compete at state because of a knee injury.

Zach Coffman was primed to cap off his high school career with a second state championship and push his state record victory total past 200 at the 3A State Wrestling Tournament last weekend. A severe knee injury in the 182-pound final match at the divisional tournament on Feb. 9 in Richfield derailed those plans.

“It was hard [to miss wrestling in the state tournament], but I still wanted to be there for my team and lead them anyway I could. I also wanted to be in the corner for Seth (Manning) for his championship match. It was good to sit back and coach and help out and get a little different perspective,” Zach Coffman said.

Manning came through with a superb tournament, but ended up just shy of winning the championship at 170 pounds — the weight classification Zach Coffman won a state title in last year as a junior.

Manning lost 3-2 in the final match to Steve Welsh of Union on Saturday at the UCCU Center in Orem. It was Manning’s third close loss to Welsh this year. The match was tied at 2-2 after two rounds.

“He (Welsh) had the lead so he just stayed away from me in the third period,” Manning said. The 170-pound Manning capped a superb prep wrestling career and pushed his high school record to 172-59 in four years with 88 pins. Manning placed fourth last year in the 152-pound class.

Manning and Coffman have been battling each other in wrestling practices since they both were 5 years old.

“They allow two coaches in the corner for matches and we usually have coach Coffman and coach Rich Valdez, but I wanted to have Zach in my corner with coach Coffman so he could help and have a little bit of the championship experience again this year,” Manning said.

“Seth has always been a good training partner for me — he wrestles hard no matter what,” Zach Coffman said.

The Tooele Buffaloes finished 10th at the tourney this season and probably would have finished as high as sixth with Zach Coffman in the lineup. “He (Zach) was a heavy favorite to win so he would have given us 24 to 30 more points,” said Zach’s coach and father Gary Coffman.

“I thought Seth had an outstanding tournament. Welsh is tough to score against because he is so long. It was the third time the two had wrestled and each match was close,” the coach said.

Zach Coffman suffered a bucket-handle meniscus tear in the knee and will be on crutches for six weeks and won’t be able to work out again for six months. He underwent surgery on Feb. 11 at Central Valley Medical Center in Nephi under the care of Dr. Joel Holman who also was a state wrestling champion at Delta High School.

Zach Coffman and Manning both would like to wrestle in college and will receive visits from recruiters once the NCAA wrestling championships are completed. Seth Manning’s brother Thomas Manning won the 4A state championship at 160 pounds in 2011 and now wrestles for the Naval Academy.